This weekend I was watching the Prefontaine Classic on TV and marveling over the speed, power and elegance of the ladies who were competing.  There’s something about watching supremely trained, highly dedicated athletes that is so thrilling and inspiring to me.  It always makes me want to work harder when running, to lift heavier weights, to be more explosive when playing basketball, to be more fearless in every way.

As I watched the women run, I thought about my own history as a sports fan and athlete, how I’ve been enamored and inspired by lady athletes since I was a gawky teenager with arms and legs like a praying mantis, and how that has continued to this very day.  I thought about the debt of gratitude I owe them for giving me and millions of other girls someone to look up to.  And hey!  Why not write about them?

So here, in no particular order, are the lady athletes who have most electrified me over the course of my short life.

When I was about fourteen or fifteen years old, I found myself flipping through the channel on the little television I kept in my bedroom. It was Saturday afternoon and I didn’t expect to find much, but I was bored and I’d finished reading my Stephen King book, so flip flip flip it was.

But then I heard the familiar squeak of shoes on parquet and the thud of rubber against wood, and I stopped flipping.  I expected to see a Utah Jazz game or maybe the Runnin’ Utes, but then I noticed a curious thing.

Ponytails.  Lots of them.

One ponytail caught my eye in particular.  Shiny and brown, it hung down the back of the tallest woman I’d ever seen in my life.  I watched as she grabbed rebounds and put lay-ups through the hoop and blocked shots, and as she crashed board after board after board, I noticed my legs stretched a bit longer and my neck a bit straighter.

I was a tall girl, so tall that I would have given anything to trade back a few of those inches, in exchange for some boobs, maybe, or better hair, but as I watched Rebecca Lobo and the UConn Lady Huskies play, it occurred to me that maybe my height wasn’t such a liability after all.  Maybe it was a gift.

It was 1994.  All eyes were on America’s Princess, Nancy Kerrigan, and Tonya Harding, the girl from the wrong side of the tracks who dared challenge her.  I sat in my dining room, halfway around the world, transfixed by the real-life soap opera unfolding before me.   Who would win? Would Nancy Kerrigan come back?  Would Tonya Harding overcome her wonky laces?  And didn’t that uber-tight French braid give her a headache?

My childish interest in the Tonya-Nancy drama-of-the-week disintegrated once Surya Bonaly took the ice.  Where the other ice skaters took great pains to disguise their strength with sweeping arm gestures and perfectly pointed toes, Bonaly did not seem interested in that.  She owned the ice, and she wanted everyone to know it.

I had never before – and never since – seen an ice skater who skated with such obvious strength and power.  She tossed off back-flips as nonchalantly as most people shrug their shoulders.  She attempted quadruple toe loops.  She never shied away from the most difficult, the most challenging moves, and I loved her for it.

Sadly, the very things I loved best about her were the qualities the judges did not much care for. But to this day I will never forget the way I felt when I saw her leap into the air, flip her skates over her head and land on one blade.  It was magnificent. 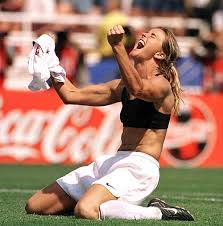 For as long as I could remember, the soccer player everyone talked about was Mia Hamm.  I wasn’t much for soccer – it hurt my toes too much and I was not terribly thrilled about having balls kicked at my head – but I admired the serious quads and calves all the lady soccer players I knew had, and I envied their toughness and their ability to endure.  Mia Hamm was no different.  She was a serious athlete who also managed to be personable and cute and did shampoo commercials and was a Cover Girl.  I liked her okay.

But man, watching Brandi Chastain as she kicked the winning goal in the World Cup, then running across the field, pulling off her top and pumping her fists exultantly as she slid to her knees was perhaps one of the most beautiful things I had ever seen in my entire life.

At that moment, Chastain wasn’t trying to be ambassador for women’s soccer or a role model or thinking about how best to promote the sport.  No, she was just being herself – her glorious, overjoyed, grass-stained self.  I still get goosebumps thinking about it. How her teammates all dog-piled her moments later.  How the stands were filled with screaming girls in Team USA jerseys.  How it seemed like the start of something revolutionary was taking place in front of our very eyes.

The revolution has yet to materialize, but that’s okay – it will.

I’m sure Kara’s inclusion in this list seems rather obvious, as she’s been referred to as the Julia Roberts of distance racing and she gets as much attention for her ridiculously beautiful face as she does for her talent as a racer.  But what inspires me about Kara is not her good looks but her honesty about her vulnerabilities.

Sometimes I think it must be so amazing to be an elite athlete, to know that you are one of the absolute best in the world at something, to know that you’ve got some kind of crazy gift that others sweat and bleed and sacrifice so much, all in hopes they will capture even the faintest whiff of what you’ve got tucked in your back pocket.

But, as with so much, the truth is infinitely more complicated.

If there is anyone who should feel at ease in the world, it’s Kara Goucher.  Yet she battles the same kind of insecurities that plague all of us, the kind of fear that promises to protect her but ultimately betrays her and yanks the things she wants most out of her grasp.  If you have ever pushed your limits, pushed them so hard you’ve failed, then you know this feeling intimately.

Kara spoke about this at length with Runners World, and reading her struggles in her own words helped me feel a little less at sea with my own daily battles against myself.  I admire her tremendously for letting us peek behind the curtain and see that even superhuman elite athletes doubt themselves and feel afraid, too.

The dozens of girls I’ve called teammates over the years

I played organized team sports through much of my junior high years and through all of high school.  One thing I could always consistently count on was being one of the worst players on my team.  The other thing was the presence of supportive girls who encouraged me to work hard and laughed with me when I did dumb shit and slapped me on the back on the rare occasions I did something right.

Serena, who could drive to the basket, ponytail flying, with as much confidence as any guy.  Lauren, who owned every court she walked on, whether it was the parquet of volleyball or the grass of the soccer field.  Teresa, whose unassuming demeanor and neat hair ribbons hid the heart of a warrior.  Tiffany, who toughened me up and gave me the teen-girl equivalent of the “there’s no crying in baseball!” speech. Crystal, who showed me that strength could come in small packages.  Julie and Michelle, who taught me that my height was never a liability.  Brittany, who could whip any boy in the neighborhood on the ball court.

And none of this takes into consideration the things my teammates did for me off the court.

What about you?  I want to know, which lady athletes do you look up to and why?