It’s not every day that I see a segment on a morning fluff show that makes me flush with anger.  Normally you have inoffensive segments about a new recipe featuring the food du jour or an interview with the contestants from America’s Next Hot Top Dancing with the Chefs, which makes you easy to tune out when you are on.

So I have to congratulate you on your accomplishment, because your segment, entitled “Women Who are Too Toned: Is it a Bad Look?” literally turned me red with rage.  Well done, GMA producers!  Well done!

Cited as examples of women who unnamed “critics” (i.e., ignorant-ass bloggers and anonymous commenters) say are getting too muscular: 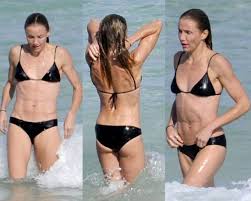 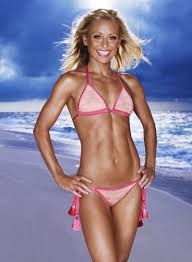 Yes, these are examples of women who are seen as possibly being too strong to be attractive.

At one point, the reporter talks about the way men are expected to be big and muscular, and says women may be facing a double standard here.

No one bats an eye when a man lift weights and makes an effort to be strong and muscular.  It’s expected of him, because that’s part of how we’ve defined masculinity – as strong and powerful.

A woman who lifts weights and builds muscles is seen as betraying her “soft” feminine nature.  She’s trying to look like a man, people say.  She’s a gender traitor.  She hates being a woman.

But when you parse it out, what’s the not-so-hidden subtext here?  It’s that women are only feminine when they are physically weak and when they are vulnerable (and hence, in need of protection from those big, strong menz).  That’s what’s at play here when “critics” bash women for being too muscular.  Think about it.

I’m glad GMA decided to talk to fitness model Summer White, who defended women who lift.  (Although I do think it’s funny – and Hardbody.com noted the same – that White is a bikini model, and yet they are using her as an example of a muscular woman.  Imagine if they had done this segment with an actual female bodybuilder?)  At least they gave a rather minor nod to balanced “journalism” in doing so.

But at the same time, I simply cannot wait for the day when ladies who love to lift weights can do so without having to hear that they are somehow less womanly because of it.