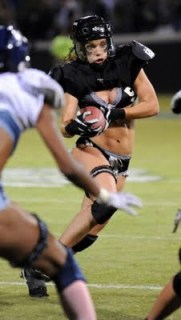 It’s no secret that I find the Lingerie Football League completely repulsive.  A lot of people do. The emphasis on the “lingerie” is a deliberate push-back against the ascendancy of female athletes by reminding them that, once again, their most important calling on this planet is to serve as spank material for hetero men.  Because we as a society are totally deficient in spank material, amirite?

But it turns out that the uniforms worn by the players are the least of what’s wrong with the Lingerie Football League.  I came across an article by Andrew Bucholtz at Yahoo! Sports Canada the other day, and, well, to say it was eye-opening is an understatement.  My eyes were so wide open my eyeballs nearly rolled out of their sockets and landed with a thud on my desk.

I was inspired to go do some more digging around and what emerged was a horrifying portrait of an organization with no concern for matters like safety, an organization built entirely on the exploitation of female athletes. I was seriously repulsed by what I came across, and I’m going to share it on my blog because I think it’s important that feminists know that the sins of the LFL do not begin and end at those tacky uniforms they make the athletes wear.

And evidently the women themselves are not the biggest fans of the uniforms.  Angela Rypien, the quarterback for the Seattle Mist, recently said on Fox News that she would like to wear a less-revealing uniform one day.  But hey, as long as straight dudes can have as many places to ogle ass and titties as they want, who cares?  Right, Gretchen Carlson?

A commenter in the afore-linked Jezebel post said the names sound like they were thought up by “Danielle Steele after five wine spritzers.”  I mean, the Mist? The Seduction?  The Sin?  These are women who are crushing each other on the field, and yet the teams’ marketers are treating them like commercials for Designer Imposters perfumes.

This should actually be the top of the list, because oh my god.  The players are not paid; their compensation is limited to travel expenses.  This, despite the fact that the league officials say the LFL has been “highly profitable.”  There’s a word for this people, and that word is “exploitation.”

When I learned about this, I was reminded of Amanda Hess’s article about the Washington Redskins cheerleaders.  The cheerleaders are part of the squad at considerable personal expense, and their images are licensed for merchandising by the NFL for calendars and such.  How much of the NFL’s multi-billion dollar pie do these women get?  About $75 per game.

This was evidently not always the case.  The players originally received a cut of net revenue, but the commissioner changed the league to “amateur status” in 2011, which exempts the LFL from having to pay them.  What’s more, the players now have to pay to participate.

4.  The league management uses union-busting tactics on the players.

When players for the Toronto Triumph expressed dismay about the firing of the only member of the coaching staff with pro football experience, the league commissioner responded with threats to fire the players who complained.  The rest of the team called his bluff, and ultimately 22 of the team’s 26 players quit.  Now that’s some fucking female solidarity.

Here’s the email exchange between the league commissioner and some of the players.  I particularly like how the commish brags that the LFL is the most popular women’s sports league in the US.  *gag*

5. The league has threatened to sue players for asking about health coverage and wages.

This is a sport where the players get seriously hurt.  They break bones and tear ACLs and separate joints, and yet the league doesn’t provide them with health coverage?  Even though the league is “highly profitable” because of these women and their willingness to get hurt?  Can you imagine if the NFL told their players, Sorry bro, I know you ripped your knee to shreds for the pleasure of a national audience, but you’re on your own with that one.   And then not only doesn’t cover them, but then threatens to sue them just for bringing it up.

Deborah Poles, who played for the Chicago Bliss and was once the league’s defensive player of the year, said the league cut costs wherever they could – including the protective gear for the players:

“We were sustaining really severe turf burns … because we had basically elbow pads and knee pads that you could just buy at the dollar store,” said Poles, who added that she got a staph infection from the burns after the league’s championship game last February.

When you don’t pay your players, skimp on their gear and refuse to provide them with health coverage – well, it’s no wonder the league is “highly profitable,” right?

7.  The players are set up to be physically violated and sexually exposed for the audience’s entertainment.

The Toronto Triumph recently held a contest in which the winner was given the privilege of tackling one of the players at half-time.  Need I say more?  Okay, I will.  The contract signed by the LFL players said the athletes cannot wear anything beneath the uniforms, like underwear or bras, because the “accidental nudity” is enshrined as part of their contractual obligations.  Basically, the league wants the players to be okay with being naked and groped.  SWEET.

8.  The league is aiming to hit the underage market as well.

It’s one thing for a grown-up woman to make the decision to play in the league.  It’s another thing for a young girl to take part.  I don’t even know what to say about parents who would approve of their teenage daughters suiting up in underwear so they can go play tackle football.  Will the “accidental nudity” clause remain intact?

This is the thing – the idea to expand the league is fueled by the fact that more and more girls (like Michael Jackson’s daughter!) want to play tackle football.  And why shouldn’t they?  The informal prohibition against women and girls playing tackle football comes from an idea of women and girls as delicate and in need of protection, but if there is anything we’ve seen in a post Title IX world, it’s that women and girls love to get rough and rowdy, just as much as the boys do.

9.  Players say the league has low standards for coaches.

Want to show how little you regard the physical exploits of your players?  Make sure they have shitty coaching staffs!

As one of the players told me, it’s troubling that the league doesn’t have higher standards with regards to their coaches.

“Mitch needs to ask himself what the requirement is to become an LFL coach!” she said. “These guys pick up any Tom, Dick and Harry off the street. Those interested should go through a series of tests to qualify just like the players do.”

I was happy to see that the league at least bothered to find some coaches with pro football experience, unlike the Toronto Triumph, whose coaching staff consists of a high school basketball coach and a flag football ref.

10. The league exploits the genuine desire of these women to play football.

Quotes I found from athletes during my research:  “I just appreciate playing football, I don’t care what they put me in.” When a player’s friend was drafted by the NFL: “But I kept thinking: ‘That could be me. That should be me. I can do this. I know I can play. I know I’m next.’ ” “If there’s ever a place where I can play professional football, you’ll see me there.” “And I was like, ‘I don’t care. I just want to play football.’ I’d play football naked if I had to. I just love the sport.”

This is what is saddest about all of this to me.  These women want to play.  They are legit athletes.  And look at how they are treated.

Listen, I’m a third-wave baby, born and bred.  I respect that women will make different choices than I will.  I respect women who choose to strip, who do sex work, who perform in adult movies.  That respect extends to women who say, “Sure, I’ll play football in my underwear.”  But I believe in backing that respect up with action.  I believe people should get paid for their work, and that they should be able to do their work in safe environments.  I do not think this suddenly becomes optional just because your work takes on an “adult” nature.

Edited to add that I’m closing the comments on this article.  I’ve had my fill of bros barging in like the white knights of the internet, all offended by my criticism of the LFL.  Dear bros, your critique is boring and tired and I’ve heard it all before.   Please find somewhere else to spew your garbage because we’re not interested here.

46 responses to “Ten reasons why the Lingerie Football League sucks”