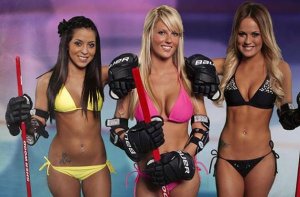 Plans are in the works for yet another bikini sports league – this time, a hockey league.

Yes, you read that correctly.  A bikini hockey league. Some enterprising man in Oklahoma has decided to launch a bikini hockey league.  In Oklahoma. And not only that, he’s trying to pitch a reality television show around the nascent league.  Because if there is one thing the world needs more than a bikini sports league, it’s another reality television show.

It’s almost seems like an Onion article, doesn’t it?  Or maybe an outtake from “Idiocracy”?  I can only imagine the array of bikini sports that are soon to follow.  Bikini fencing, perhaps, or bikini rugby.  Maybe some bikini baseball would be nice, or some bikini soccer?  How about a spot of bikini cricket?  I should probably patent these ideas before some bozo with an overabundance of unearned confidence and belief in his creative powers reads this and goes, “Hey, that’s a good idea!”

Putting aside the inherently exploitative nature of yet another bikini sports league, can we talk about the practicality of playing ice sports in bikinis?  Cary Eskridge, who cites his “extensive hockey background” in a news release, surely knows that ice is, you know, cold, and that bikinis are, you know, for warm weather, right?  And he’s also aware that hockey players wear pads and helmets, right?  Or is he going to take a cue from the Lingerie Football League and send the players out in little more than some dollar-store knee pads and a prayer?

(Edited to add that I’ve learned the sport is actually played on inline skates, not ice skates.  So I guess that’s a good thing?)

I’m sad to say that as absurd as this scheme is, it still does not approach the depths of absurdity broached by Dennis Rodman’s topless basketball league.  Has Dennis Rodman ever actually spoken to a woman with breasts before?  He does realize that we wear bras not because we think they look cool, but because unrestrained mammaries can be quite painful for the mammarial owner.  Even walking up and down the stairs can be an agonizing experience at certain times of the month.  I frankly can’t imagine what abyss of pain would accompany a simple lay-up.

Of course, I recognize that it’s pointless to expect that Rodman, Eskridge or LFL CEO Mitch Mortaza would really give a single thought to things like “player safety” and “the importance of bras,” because those are things that really only affect the woman who has the body.  They don’t care about that.  They just want to see boobies bounce.  They want to see boobies bounce all the time. They don’t get to see enough boobies bounce, dammit, and so they are going to bring bouncing boobies into every possible aspect of culture, whether it makes sense to have them there or not.  What might be comfortable or safe for the women involved is secondary to the truly important matter at hand, which is that men must never be deprived of the right to have a stiffy at all times.  Amirite, fellas?

(I mean, really.  Are there not enough bikini-clad women on television, music videos, magazines, movies, commercials, print ads, sporting events, internet, etc. fucking etc.?  Are dudes really that deprived of naked female flesh that they have to invent fake sports leagues so they can see even more of it?)

I guess I should give Eskridge a bit of credit.  After all, the casting call page asks potential players to send in head shots and full length bikini photos, but doesn’t waste a single pixel on playing abilities or skills.  The man wants to get himself a reality TV show, and with the kind of buzz this story has gotten in just a few short days, he could very well find some production company that’s willing to do it.  But that doesn’t mean we have to watch, and ladies, this really doesn’t mean you have to try out.  You can make money off of being cute and sexy without having to slide your bare ass around on ice to do so.

One of these days I’ll have to write more about the troubling social themes that underlie this proliferation of bikini sports leagues, but I’m too irritated to do so now.  So I’ll just say I’m hoping this is the last we hear of the Bikini Hockey League. May its tryouts draw not a single lady, may its reality-show pitches fall on deaf ears, and may its games be poorly attended.

9 responses to “Bikini Hockey League: because the world needs yet another bikini sport”