ESPN The Magazine’s annual Body Issue is about to hit newsstands, and earlier this week, the magazine released the naked photos of professional athletes that make up the centerpiece of the issue to drum up some buzz.  I am an unabashed fan of the Body Issue, and so when I got home that night, I looked up the photo gallery and checked out all of the photos.  (Don’t worry, ESPN – I’ll put my money where my mouth is and pony up for the print issue as well.)  I was not only pleased by what I saw – I was flat-out thrilled by it.  Brian and I were each checking out the photos on our laptops, and the entire time we were like, “Did you see that photo? Wow, that’s so cool. Whoa, Colin Kaepernick has a lot of tattoos. Holy shit, check out the dirt-bike rider’s quads!”

This year, it almost seems as though the editorial staff behind the issue heard the criticism some people lodged about certain gender disparities with the photos – that the female athletes seemed more likely to be posed passively while the male athletes were in powerful positions – and took it to heart.  Like, I can almost hear the photo editors saying, “Okay, so you don’t want cheesecake photos?  Well, here’s a photo of a buff naked Motocross rider! BAM!”

Or “Oh, photos of bent-over naked women are too porn-y for you?  Well check out this lady climbing a huge rock while naked! How do you like them apples?” 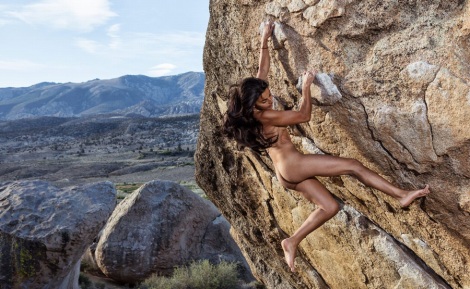 The Body Issue isn’t perfect – I would have liked more variety in ages and in body types and I wish they would have shown athletes with physical disabilities – but it still represents a radical departure from the way in which many female athletes are marketed.  (Helloooo, Roxy!)  Yes, the athletes are all beautiful and the photos are pretty sexy in an arty sort of way, but for the most part, that beauty and sexiness is conveyed through action and talent.  For every photo like the one of Courtney Force reclining on a huge tire, there’s a photo of Marlen Esparza looking totally fierce as she prepares to hit her punching bag.  (I also adored the photo of Kerri Walsh Jennings posing first, with baby bump, and later, with baby, but I think that is primarily because I adore Kerri Walsh Jennings.  Tall girls unite!)

ESPN was initially trying to compete against Sports Illustrated’s Swimsuit Issue when they launched the Body Issue in 2009, but I don’t even think you can really compare the two anymore.  Each issue has some naked women in it, but that’s where the similarities end. ESPN shows plenty of naked men alongside the naked women, whereas I’m pretty sure I’ve never seen a guy in the Swimsuit Issue.  (Although, to be fair, it has been years since I’ve bothered to look.)  But more than that, it’s the intent behind the photos.  Most of ESPN’s photos show the athletes in action, with lighting and posing meant to show the lines and musculature of well-honed bodies in motion.  As Sharan Shetty at Slate put it, “The nudity serves a purpose: It unveils the mechanisms by which she achieves her physical accomplishments.”

This leads me to my next point, which is that I don’t mind that many of the photos are quite sexy – and in fact I rather like it – for the simple reason that it shows sexiness and sexuality as dynamic and humanistic. The athletes are not just vacant receptacles upon which we can project whatever sexual fantasy we’d like. Instead, you can see their personalities: their intensity, their joy, their pleasure, their laughter.  Yes, you can argue that the athletes are being sexualized in these photos, but what’s important to me is that they are not being objectified.  You never forget for a second that you are looking at real people.  They all are capable of performing feats we might think of as superhuman, but the photos show them to be just as human as the rest of us.