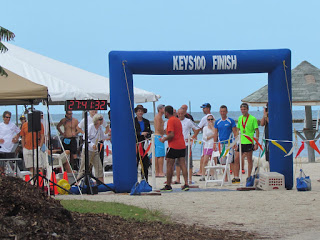 The finish line of the Keys 100 in 2012. With hard work, luck and preparation, I’ll be running under that in seven weeks!

I’ve finally started getting myself back together after spending much of the last couple of months immersed in projects, which hopefully means I will be back to blogging on a more regular (i.e. more than once a week) basis.   I’ve got a few things I’m working on right now, but one of the things I wanted to write about as soon as possible were the logistics of running my first ultra earlier this month.

Now, I’m kind of already acclimated to endurance sports that require a bit of logistical planning as I’ve gone through two seasons of triathlons and duathlons at this point, and both of those are sports that require you basically drag a steamer trunk full of equipment to the race site, just to be able to meet the bare standard of what’s required to complete the event.

But the ultra was different because while it was just one activity, over and over again, it was an activity that lasted me nearly seven hours.  That’s just a couple hours shy of the running time of the entire Lord of the Rings trilogy! And when I do the Keys 50 in less than two months, I’ll be on my feet for an even longer period of time, probably longer than all of the Star Wars episodes combined (but fortunately with no Jar Jar Binks, thank heavens).

Because of the length of the event – and also because the aid stations are not as closely bunched together as with most races –  I had to take a lot of things into consideration that are not even on my radar for triathlon or regular road races. Here’s a rundown of how I handled all of that, as well as how I will have to do things differently when I run the Keys ultra.

First, my shorts.  I have become incredibly picky about my shorts over the years, specifically my desire to have actual pockets in said shorts.  As far as I’m concerned, the key “pocket” (I use that word loosely) can go the way of cotton racing clothes and sports bras cobbled together from jock straps.  I am doing my part by never, ever buying another pair of running shorts that does not have at least one substantial pocket that closes with a zipper. I also needed the shorts to be long enough that I wouldn’t end up with a third-degree friction burn courtesy of my inner thighs, so I ended up wearing my Oiselle Long Rogas, which have two! – TWO! – real pockets as well as a six-inch inseam.  They worked perfectly.  I know Oiselle’s stuff is spendy but I’m willing to forgo six pairs of shitty no-pocket shorts that rustle like plastic grocery bags if it means being able to afford one pair of shorts that let me carry more than a single energy gel at a time.

(Seriously, y’all. My kingdom for running shorts with pockets.)

I also wore a sleeveless top instead of my normal running singlet because I ran with a hydration pack on my back and I didn’t want to have chafing all over my shoulders.  (More about that later.)  I started the run with my Brooks Ghosts but then at mile 16-17, I switched those out for an old pair of Asics Gel Nimbus.  That was a really weird sensation, because my feet had gotten used to one insole and then all of a sudden it was like, “Surprise! New insole!” I adjusted okay but it was really awkward for about a half-mile.

With six or seven aid stations over the course of 33+ miles, I was going to be responsible for my own hydration.  Plus, it was hot. I wouldn’t say it rose to the level of “hot as balls” – maybe “hot as vas deferens”? – but it was in the 70s for the last part of the run.  I managed my hydration by wearing a Camelbak that could hold about 1.5 liters of water, and then I had an Amphipod handheld that I had filled with a mix of water and Accelerade.  I sipped from each regularly – the water more than the Accelerade mix, obvs – and at the halfway point, I dumped out the frothy remnants of my Accelerade mix and refilled with a fresh mix of powder and water.  Brian helped out by adding more cold water to my Camelbak, which not only helped by giving me cold water to sip but also by cooling my sweaty back off.

I kept a good sweat going pretty much the entire time, and yet I only had to pee once, and my post-run pee was a good shade of yellow. (And if this bit of information grosses you out, I’m sorry, but welcome to the world of endurance sports, where pee is one of the less disgusting things you’re likely to encounter on any given day.)  In all, I think I managed my hydration well, which makes sense as I’ve had over six years of experience as a distance runner who trains in Florida heat to figure this stuff out!

Whenever I do marathons, I usually stick to energy gels and sports drinks, which is usually enough to get me through. (Although there have been a couple of times when the thought of eating yet another energy gel made me nauseous and angry and so instead I ate fruit.  Delicious, delicious fruit sent from heaven itself. Nom nom nom.)

However, I’ve heard repeatedly that energy gels and sports drinks are not enough for an ultra-endurance event.  Fortunately Brian learned a few things during his Ironman training, like that Ensure/Boost shakes were a good way to get quick calories and also that Clif bars work well because you can chew them down to a thin gruel-like consistency and then swallow them while running/cycling without ending up with crumbs going down your windpipe.  *shudder* I had practiced eating Clif bars while running as part of my training and they worked well for me, so I packed a couple to take with me in my Camelbak.  About once every 10-15 minutes, I’d take a bite and chew it while running, then swallow it.

There were two kinds of aid stations: ones that were just liquids and ones with food.  The ones with liquid had Gatorade, full-sugar cola and water.  When I went to those stations, I always drank one of each.  The ones with food had candies, chips, pretzels, bananas, and, in one instance, peanut butter and jelly.  Every time I stopped by one of the food aid stations, I made sure to eat a couple of things.  Once, I ran off while chewing a quartered PB&J, and another time, I ran off with a handful of pretzels, which I ate every time I stopped to walk.

Basically, my strategy was to keep a constant trickle of easily-digestible calories going into my system.  I would have to say it worked well, because I never had GI distress and I never felt like bonking. When my muscles gave me trouble, it wasn’t because they were out of fuel but rather because, you know, I’d just run thirty some-odd miles.

My feet were not nearly as mangled as I expected them to be.  I had three HUGE blisters around my big toes, one of which actually ended up getting infected (puke), and I lost a toenail.  The worst damage came from my sports bra, though. I wound up with some serious chafe marks beneath each boob, even though I had applied a liberal layer of Body Glide before the race.  That kind of sucked.

My left knee ended up bothering me for a couple of weeks after the race, but since I didn’t run at all during that time thanks to my infected blister, it had plenty of time to heal.

I stepped back to four days a week of running for this, with two shorter runs during the week and then a monster run on Saturdays followed by a shorter long run on Sundays.  My plan has been to tackle the long runs as if I were racing, which means a run-walk ratio of three minutes to one minute.  (This is what I’ve done every time I’ve tackled a new distance – half marathons, marathon, you name it. It works.)  I’ve dressed for those races in the clothes and gear I plan to wear for my ultras.

I’m working on bringing more cross-training back into my plan – more time on my bike, more weight training, time in the pool.  My reasons are three-fold: I miss cross-training, triathlon season is starting, I don’t think my body can handle mileage in excess of 50 mpw.  This way I can stay fit and strong while limiting the risk of injury due to too much running.

There’s a psychological component to my training as well, which in my case involves a lot of research, watching videos and reading race reports, practicing visualization and positive affirmations.  This shit sounds hokey, I know, but it really makes a huge difference for me.  In the past I’ve had a tendency to fall down the spiral of suck – which is my name for the psychological black hole I fall into when things get rough – but since I’ve started making an effort to train my mind as well as my body, I rarely fall down the spiral of suck these days.  Seriously, it works!

Those differences are not insubstantial!  So I’m trying to prepare by doing things like going out for my long runs starting at 10 a.m., but I yet haven’t had the opportunity to run in the kind of 85-90 degree heat that I’ve heard characterizes this race.  Hopefully that will come soon.  And yes, I am aware I used the word “hopefully” in reference to running 25+ miles in 85 degree Florida heat.  It is true, ultra training has utterly demented me.

I also need to get a reflective vest to wear so I don’t get hit by a car (because that would suck) and a new sports bra that won’t rub my ribcage into oblivion, and I’m going to get a second pair of Asics Gel Nimbus because I know the Brooks Ghost are not going to cut it for this.

I also have to do some serious research into prepping my feet.  I don’t mind if my feet are mangled after the race, and in fact, I’ve just learned to accept that I will have ugly monkey feet until the day I decide to stop running, but I don’t want to have those issues popping up mid-race. I’ll try Super Glue, duct tape, those funky Injinji toe socks, whatever. I just want to keep my feet intact until the second I cross the finish line, and then they are free to erupt into a billion nasty blisters.

So that’s where I’m at right now.  I’ve got seven weeks left until the big day, and I know that if I want it to be an incredible experience, I have to put the training and preparation.  It’s a lot of work, I know, but I’m pretty sure it will be worth it.

31 responses to “My first ultra pt. 2: Logistics, equipment and stuff”